The Importance of Dissolved Oxygen in Water for Aquaculture 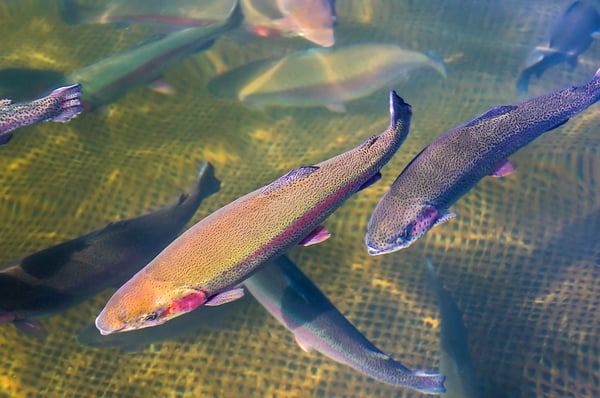 As our oceans become overfished and the world’s population continues to grow in size, aquaculture has become a massive global industry and secure food source. The percent of seafood supplied by the aquaculture industry has risen from a mere seven percent in 1974 to over 44 percent of all seafood consumed today.

For an industry that’s anticipated to reach $242 billion in value in the next four years, water quality monitoring and dissolved oxygen (DO) testing is of vital importance. In order to raise healthy, consumer-safe, and market-ready seafood, aquaculture companies must maintain precise DO levels in their aquatic habitats—or suffer staggering consequences.

Understanding Dissolved Oxygen and Why Does It Matter to Aquaculture

It’s common knowledge that oxygen is essential to terrestrial life, but it also plays a key role in underwater ecosystems. Despite the fact that fish don’t have lungs, they still require a small amount of oxygen in order to breathe and carry out essential functions. They access the oxygen they need to survive via the water around them, in a form known as dissolved oxygen, or DO.

The total amount of oxygen in the ocean and other natural water sources is much less than the amount in the atmosphere and is typically measured in parts per million (ppm). Most fish require DO levels of just five ppm or greater in order to survive. That said, larger fish need more oxygen than smaller fish and DO levels can vary within a single aquatic environment based on the volume and type of plant and animal species present. For example, the suitable DO level for shrimp culture is  3 mg/l. However, values higher than 5 mg/l are recommended for intensive aquaculture practices.

Although five ppm doesn’t seem like much, the effects of DO depletion can be severe. Fish that don’t have adequate oxygen resources are more prone to disease and infection, are less efficient at converting food into energy, and experience stunted growth. If oxygen levels fall below a certain threshold, they will eventually die.

Extremely high levels of DO usually result from photosynthesis by a large amount of plants. Substantial uncontrolled plant growth, especially algal bloom, is often the result of fertilizer runoff, and can also have an adverse effect on aquaculture.

Causes of Low DO in Water

There are many causes of low DO levels in water. In aquaculture, the most common cause of low DO is overstocking or overfeeding fish in an underwater enclosure or tank. Fish need oxygen to process the food they eat into fuel, so more fish and more food inevitably means that there’s more oxygen being consumed on a daily basis. If oxygen isn’t being adequately replenished at the water’s surface or by photosynthesizing organisms, DO levels will tailspin. For this reason, many aquaculture facilities will introduce photosynthesizing aquatic organisms into a farming environment to help sustain adequate DO levels for larger fish populations.

Phytoplankton crashes can be caused by other natural factors as well. For example, a sustained lack of sunlight and wind due to clouds or other obstructions can inhibit photosynthesis, killing off phytoplankton species and depleting DO levels.

DO levels can also be influenced by pH. Any changes to the pH value of water can affect how much DO the water can hold and transport. As you attempt to uncover the reason for changes in DO, take frequent pH readings to determine if the two metrics are connected.

Recognizing Symptoms of Low DO in Fish

Fish that fall victim to low DO levels will often seem lethargic and will spend more time at the surface of the water gulping air or in front of an aerator. They might also exhibit a loss of appetite. Because larger fish require more oxygen to survive, they will die of oxygen depletion before small fish and other organisms in the same environment. They might also be quicker to display symptoms of oxygen depletion.

Aquaculturists and fish owners should monitor DO levels on a routine basis using a portable or inline DO controllers, transmitters, or analyzers. By tracking changes in DO levels, you can identify when DO is getting dangerously low and make adjustments to your aquatic environment to increase the amount of oxygen present.

Increasing DO in Water

If your water quality monitor reveals low DO, there are a variety of things you can do to boost DO levels in your aquatic environment. They include:

If you frequently monitor DO levels, you should be able to correct for small changes without having to take more intensive measures such as replacing the water.

To compare different water-quality monitors and find the right DO tester for your needs,  click the link below to learn more about Jenco Instruments and to locate a distributor.